This is John Holbrook’s latest 6-minute video about his death row photography.
This video is posted courtesy of WFAA/CNN video producer Doug Burgess.

This video aired to 35 million Europeans on the French, Arte Network.
Start watching at the 16-minute mark to see Holbrook’s art exhibit and his investigative work where he interviews a Juror that condemned a man to die in a Texas, capital murder case. In the video, Holbrook presents the juror with recently discovered evidence about the case and that juror states that he would have never condemned the defendant to death had known the new evidence.

John Holbrook’s death row exhibit at the Norwegian Opera house in Oslo.
This video was broadcast on the nations biggest News station, TV2 Norway in October 2008.

Photos paint another picture of the death penalty

Texans may have a popular image of gun-loving death penalty advocates, but private investigator-turned-photographer John Holbrook is a long way from that stereotype. He believes passionately the death penalty should be abolished and is currently touring the world with his collection of photos featuring death row inmates. WRS’s Conor Lennon met with him and asked where his certainty on the issue comes from. 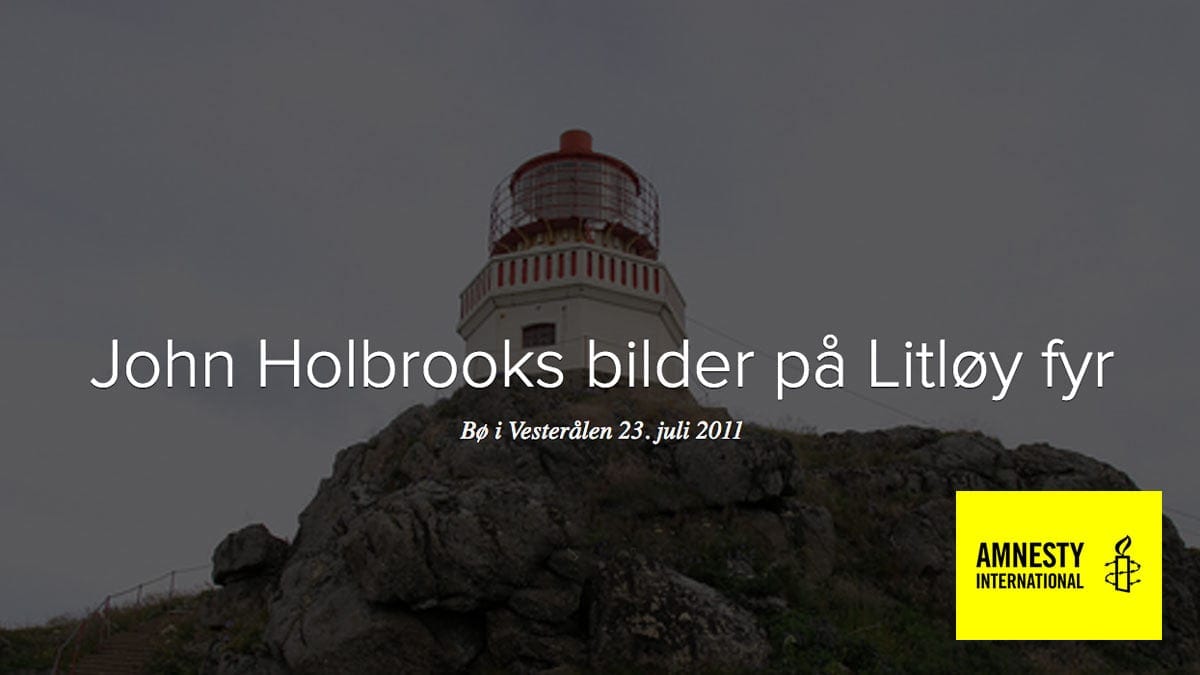 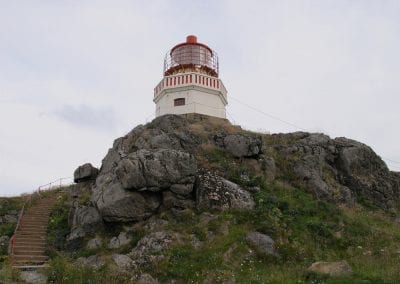 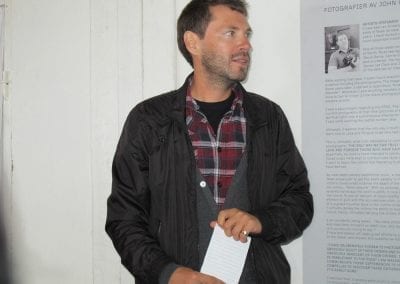 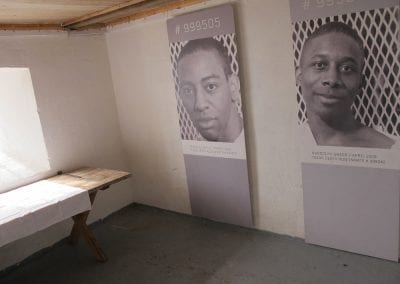 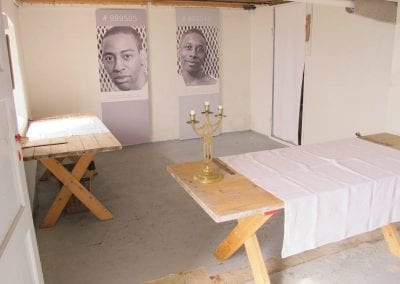 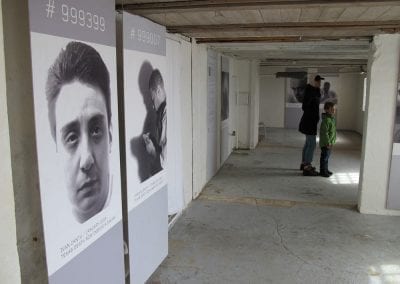 I had a dream. I saw lost souls floating around the top of the world. They were lost because they could not forgive. They were attracted to the light of the lighthouse and went inside to see the images of the forgiven. They then reasoned, ‘if someone can forgive these people than I can forgive my debtor’. The lost souls then went into the light.

By installing my images of death row inmates in a lighthouse in the artic circle, I’ve created a great big radio transmitter that broadcasts the message to the universe that we are ready for Christ to come back.

By GAYLE REAVES, PHOTOS AND CAPTIONS BY JOHN HOLBROOK

Shooting through the thick glass into the narrow box of a prison interview cubicle, John Holbrook had few options as a photographer. On Texas’ death row, the inmates’ uniforms were routinely white, the walls barren, the lighting harsh. But there were faces, body language, hands. And so he used those things to tell the story: hands clasping each other, or pressed against the glass, folded in prayer, spread across a chest. Eyes looking straight at the camera, or giving a sideways glance.
Holbrook, who also is a private investigator, is a confirmed opponent of the death penalty, and his photo essay was originally suggested by fellow anti-death penalty activists. But along the way, he said, he realized that his pictures are as much for himself and the families of the killers’ victims as they are for people who’d like to abolish capital punishment — mainly because Holbrook came to the death penalty debate through hate and guilt.

In 1994 and 1995, Holbrook worked as an investigator in a capital murder trial, studying crime scene and autopsy photos of a 16-year-old’s grisly death — raped and tortured, she’d been finally shot in the head, the exit wound making a ragged hole between her eyes. As he studied the pictures and learned about her, he grew to hate the two “animals” who’d so viciously attacked her. “I was wishing I would be the ones injecting them,” he said, referring to the drug cocktail used in executions.
Holbrook wasn’t working for police or prosecutors, however — he was working on the legal defense team of one of the defendants. And so he took the anger and revulsion and hate and tucked it inside, where it stayed for years, his own private hazardous waste dump, leaking its toxins into his psyche.

Along the way, Holbrook began taking pictures of homeless people and other social outcasts around North Texas, often depicting them with halos or in saintly poses. His work drew the attention of churches, homeless advocates, and CNN and became part of a national exhibit.

But amid the recognition, something was wrong. Holbrook had begun to notice that he was becoming fixated by various round images, like the hole in the concrete he passed on his daily run that he’d stop to stare at for long minutes. A hubcap, a drain pipe — same thing. And as he started, he’d begin to see again the decomposing body of the murder victim, with the wound in her forehead. “I might have killed myself, it was that bad,” he said.

A psychologist diagnosed Holbrook’s problem as post-traumatic stress disorder, brought on by the time he spent with the gruesome pictures from the young woman’s murder. His photos of the homeless, the psychologist said, were an unconscious attempt by Holbrook to replace the horrible images with good ones.
Over the years that followed, Holbrook came to another realization: He not only had to replace the images in his mind, he also had to replace the hatred with something more positive.

As he worked his way through that process, Holbrook continued to take photos of homeless people. That led, last year, to an inquiry from two anti-death-penalty activists from Oslo, Norway, who approached him about doing similar photos of the men and women on death row in Texas. As it turned out, one of the two activists had been a pen pal for the killer who had tortured and murdered the young woman in the pictures that had caused Holbrook so much anguish a decade earlier.
Negotiations on that project broke down temporarily, and Holbrook approached Fort Worth Weekly about doing the death row portraits for this paper — to put a human face on the most active death row in the country.

And so Holbrook went down the path followed by many before him: He started turning his anguish into art. Beginning in January, Holbrook made repeated trips to Livingston, where men sentenced to death in this state are housed, and to Gatesville, where the women on Texas death row are incarcerated. He has photographed only a handful of the condemned – one of nine women, 10 of about 380 men. Since then, two of the men have moved off death row: Thomas Miller-El of Dallas dropped his appeal, which had been based on Dallas’ formerly racist jury selection procedures, in return for a life sentence. LaRoyce Smith, not pictured here, was granted a new trial.
Holbrook’s subjects range from a man convicted of beating two women to death with a skillet to Darlie Routier, the glamorous Rowlett housewife convicted of fatally stabbing her two sons, to Travis Runnels, a young man who, already serving a long sentence for aggravated robbery, graduated to death row by knifing a prison factory supervisor. They also include Randolph Greer who, though only 18 when he was arrested in Houston, was also an accused serial rapist, described by police as a remorseless psychopath. Tony Ford is another subject, convicted largely on the basis of one witness who has since recanted and another whose identification of Ford is suspect due to the inmate’s eerily close resemblance to the man that even police have heard was the real killer. And then there’s Nelson Gongora, a longtime violent Fort Worth gang leader with a ruthless reputation, who shot his victim in full view of several witnesses; he asked Holbrook to send copies of his picture to his mother.
“I have deliberately chosen to photograph those who are very obviously guilty of the crimes they are convicted of and those who are probably innocent as well,” Holbrook said. “If you feel compelled to figure out which is which, please do so.”
For the most part, Holbrook is not an apologist for the inmates. “Most of them are guilty, and most of them are lying,” he said. But that doesn’t change what he sees as his mission.

The ultimate conclusion he came to, Holbrook said, is that, for families of the dead and for collateral-damage victims like him, “The only way we can truly stop suffering is to love and forgive those who have caused the suffering.” He wants viewers to see the common human link between the killers and jailhouse preachers and themselves. “The ultimate question we are trying to answer when we look at these condemned human beings is, ‘Am I capable of that?’ And the answer is yes,” he said, “given the same life experiences they have had. … They are our other selves.”
If that all sounds mystical and churchy, Holbrook is decidedly the first but not the second. He believes in God but has no use for organized religion.
And so Holbrook also realizes — and doesn’t care — that many of the inmates agreed to be photographed because they’re grasping at any straw that might save their lives: If they look meek and reverent, maybe someone will help with their appeal or join the fight against the death penalty in time to keep the needle away from them.
The inmates had different reactions to Holbrook and his camera. Ford, for instance, wanted to be photographed while engaging in prayer. Routier flirted. When he took Greer’s picture, Holbrook said, “It was as if I was not there. He used the brief photo session to escape into some kind of fantasy world. He posed like he was the subject of some kind of exotic fashion shoot.”

Holbrook said he found that Miller-El — arrested following a shootout with police, after killing one man and leaving another paralyzed by his wounds – has, over the decades, become one of the most beloved people on the death row unit, respected by guards and inmates.
The 43-year-old photographer believes in the “spiritual transformations” that inmates such as Miller-El appear to have undergone. “Would they have made these transformations if not for the fact that they were about to be killed?” Holbrook asks himself, and he has no answer.
Holbrook was most affected by his session with Ford, whom the photographer said: “has the best innocence claim of anyone I have photographed.” That causes Holbrook great anxiety. After that trip, he said, “I woke up at 3 a.m. and had a panic attack.”
But the “reality of the death penalty finally set in,” Holbrook said, after his visit with Runnels, who committed his murder behind bars. “I was taken by the absurdity of wasting such a perfect physical example of a human being” — and by knowing what Runnels did to end up where he is.
Holbrook hasn’t talked to the victims’ families, but he doesn’t expect them to accept his view. It took him a long time to come to it, after all, and he personally has lost no one to a murderer except, almost, himself, and a girl he never met in life.
He intends to keep taking death row pictures if he can. And the Oslo group and others are again working on plans for the photo exhibit to tour Europe, where opposition to the death penalty is much stronger than in this country. The portraits will also be shown around the United States.
The man whose defense Holbrook was working on back in 1994 got a long prison term. His accomplice was sentenced to death and executed in April 2007, the photographer said, “about five days before my son was born.” Holbrook still aches for the “beautiful human being” who was the victim in that case and still get echoes of the psychological stress he went through back then. But Holbrook said he’s learned the mechanism for defeating those demons.
Forgiveness, he said, “works like magic.”

The Murder Victims
Fort Worth Weekly was unable to obtain pictures of most of the victims of the murders for which the inmates in the portraits were convicted. In some cases, local newspapers or government agencies declined to allow photos to be copied.
Here are the victims and their circumstances: